The Catcher in the Rye by J.D. Salinger 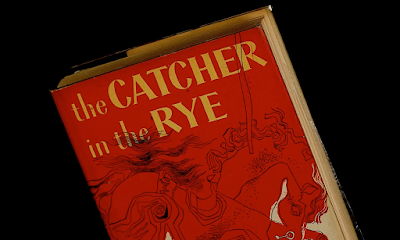 The Catcher in the Rye - first edition cover from 1951 - is it too quaint for young people now?

Six members gathered to read from the classic novella of J.D. Salinger. This was the second time reading the story for most of us, and it brought back memories from long ago. But the book was now revealed in a different light by the passage of decades.


Priya, Bobby, Indira, KumKum, Talitha, and Amita after the reading


You will have an idea of the rapt enjoyment with which the individual readings were received from this picture of Talitha reading as KumKum listens:
She is reading the tender recall of his kid brother, Allie, dead of leukemia, as Holden Caulfield is writing an essay on Allie's old baseball mitt, which he kept as a treasure: it had "poems written all over the fingers and the pocket and everywhere. In green ink."
Several of the women found that their teenage sons have, or had, similar  rebellious characteristics. A great deal of time in the discussion went into getting to the bottom of Holden's unique personality, as revealed in his adventures and conversations with a variety of people. It's all there in our discussions; please see the Full Record and Account of the session on June 5, 2009.
Here's another picture. Indira and Talitha listen as KumKum reads from the conversation between Phoebe and Holden when the kid sister challenges him to name a single real thing he likes!


The next session will be Poetry, on July 3, 2009, at DC Books on Chittoor Road at 5:30 pm. The novel for the following session will be selected by Bobby and Indira and notified to members. The date has yet to be fixed.
Posted by KRG Convenor at 14:20 3 comments