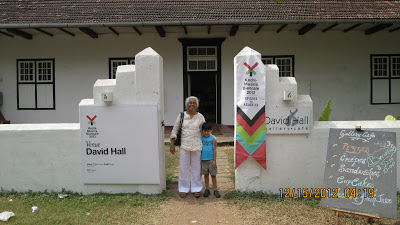 Grandson Gael & KumKum at David Hall, one of the venues

The idea of a Biennale, in order to provide a stage for modern Indian art, has been around a long time. Indian art was to be set off against a potpourri of global art. The first Biennale ideas in India were mooted long ago and one was even held without a second edition to follow. Whether this will happen in the case of the Kochi Muziris Biennale (KMB) will be known only in 2014. Incisive questions have been raised about the lack disclosure of how public funds (Rs 50 million) were used:
http://johnyml.blogspot.in/2011/12/kochi-muziris-biennale-biggest-story-of.html

Yet KMB has descended upon the Fort Kochi, an under-prepared small town with none of the splendid viewing spaces or neatly kept public thoroughfares equal to hosting a Biennale for India’s outpouring of contemporary art.

The exhibition galleries in Fort Kochi are little more than dusty old warehouses, for decades fallen into disrepair, and nothing tangible has been done to refurbish the decrepit hallways and crumbling wooden/brick stairways at the main venue, Aspinwall House, on Calvetty Road. It is an old warehouse on the estuary of the Cochin harbour where spices, coir, rubber and other goods in trade were stored before shipment. Except for a coat of paint on the external façade of the main portal, nothing has been done to make the warehouses a people-friendly or art-friendly space. The air is stagnant and musty, the humidity near 100%, and there are no exhaust fans in the cavernous halls.

For the sum of Rs 50 an art-lover can gain entrance to each of the venues. But if Aspinwall is decaying and stumble-prone, the other two sites further along the same road are in a greater state of deterioration.  Only in our chalta hai Bharat would a foundation set up for the express purpose of providing a platform for artists from India and the world (Sweden, Australia, Scotland, Iran, China, Egypt, …) be satisfied with such arrangements.

What impelled me was curiosity, and it was the same for all the others, the great majority of whom were not art-lovers, but like all Indians inexorably drawn to a mela. What then could one make of the artistic attempts of those who were invited to display their works?

One of the first layouts awaiting the viewer upon entering the first hallway was called ‘Dutty’, a plastic screen with splotches of dirt on it with hosepipes on the floor leaking water onto a muddy floor. It symbolised what’s dirty in the world, not something anybody walking in from Calvetty street needed reminding of. I forget who erected this curtain on the world’s dirt and its offshoots (e.g. mosquitoes, again an oppressive nuisance in Fort Kochi). But let it pass.

Next to it was Vivek Suhasini’s photographic re-imagination of The Last Supper, set now in Gaza, not far from the original scene, with black burqa clad women gathered around a table set with bred rolls and fruit. The lighting heightens the sense of  impending tragedy:

Vivek has a another series of backlit photographic films in which he uses the two faces that Picasso often gave to portraits of women (Portrait of Dora Maar), and uses his own profile as one of the faces while impressing on it the face of some other well-known personality. Here’s an example: Further down the same long passage hang some of the artistic creations of Maya Arulpragasam better known as the pop singer, M.I.A.  She has devoted much craft and art to producing holographic 3-D designs mounted on mirrors: 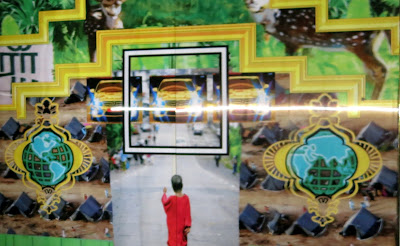 Sumedh Rajendran in the adjoining space has installed a blocky 3-D art in wood with black boots. You may like the crisp lines and sweeping curves and the odd disarrangement: 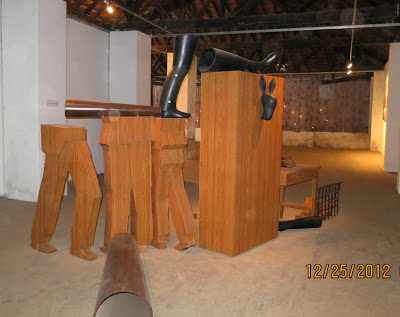 As you exit the first long hallway to re-enter the light, there stands a small pyramid that I could only associate with the glass pyramid at the entrance to the Louvre Museum: 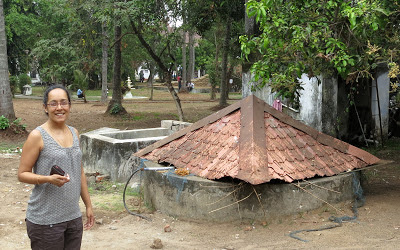 In another darkened room (why so much darkness one has to ask) is a moving tribute to an old school teacher-turned-seed-farmer’s  lifelong attempt to gather varieties of rice suited to all climes in his small 2-hectare farm This remarkable man is Natbar Sarangi; little wooden boxes along the wall contain the 350 varieties he has grown and archived. A little book tells the story, but it is hard to read in poor illumination and standing in the stifling atmosphere is even more enervating. 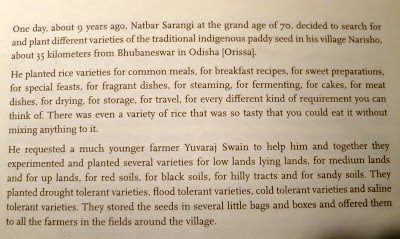 Sidling along the walls of the passageway you enter what is labelled as a Conservatory, a place to store old toys and cast away amusements. It is a fine piece of buffoonery to see this figure of a clownish man on a dog blowing on a horn: 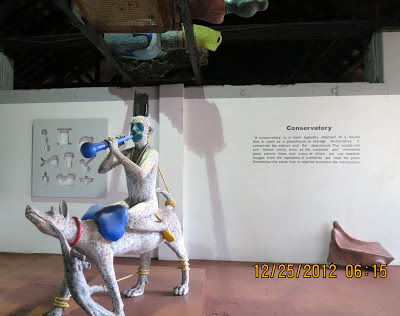 There is a Scotsman’s (Dylan Martorell) experiment in the next tenement, a kind of Rube Goldberg device to employ programmed actuators striking with a stick on various surfaces, in the expectation that a pleasing rhythm might result. Euphony is in the ear of the listener to this ensemble:

The next exhibit saturates the senses with an overpowering aroma of jeera before you even come around the corner to glimpse it. It looks like nothing so much as an attempt at an Alexander Calder mobile, with aluminium degchis filled with jeera powder and agitated, to produce a heavy spice scent:

In an outdoor covered space outside stands artist Jonas Staal's tribute to revolutions that have swept the world – ‘the supressed political subconscious of so-called democratic states’, he calls it. They are the iconic flags that have carried the hopes of small groups denied rights in some corner or the other of the world:

One of the largest in the sheer number of exhibits is photographer Atul Dodiya’s tribute to those who have put modern Indian art on the map. Well-known artists are there, and relatively obscure artists too, upon whose labours ultimately rest the achievements of Indian art. They are pictured in his frank naturalistic portraits, often in the company of others: 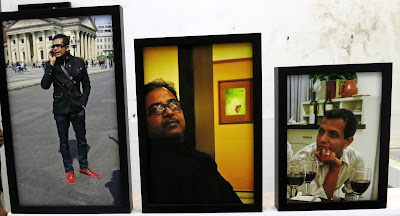 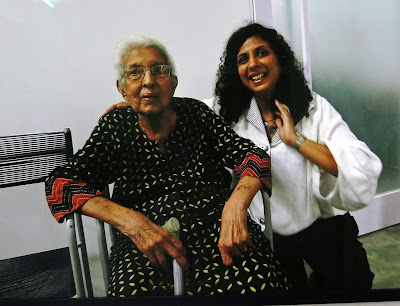 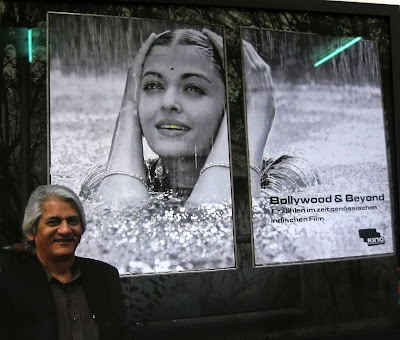 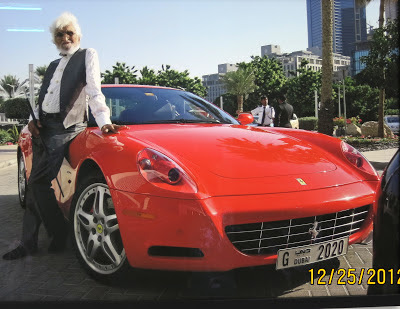 In the attic of a building in the Aspinwall complex stand these slanted tiled roofs set up perhaps as a tribute to the ubiquitous Kerala tiled roofs: 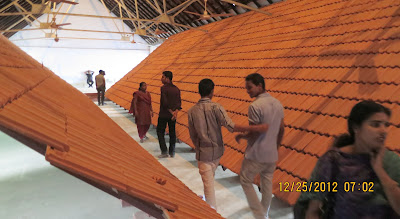 Nearby, in a disorderly clutter, granite holes lie around, yearning to be filled, or are they merely cast-off grinding stones? This is by Sheela Gowda and Christoph Storz:

As if to reinforce the clutter, artist Subodh Gupta has suspended a Kerala vanji (boat) filled with found objects — trash of the kind that is commonly scattered about in Fort Kochi's ill-kept streets and would not have been hard to find: 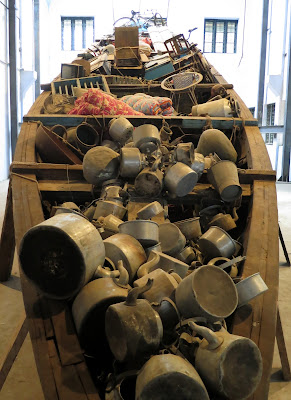 One of the meticulously designed scenes is by artist Vivan Sundaram. It might be the scene of an excavation of a lost city in ruins, constructed out of broken shards of pottery. The topography of the red terra-cotta is alluring:

It is nice to come upon an actual artist at such a Biennale. Here is artist and photographer, Vivek Vilasini, with my daughter, Michal: 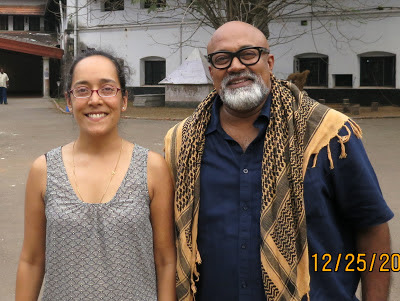 After a gulp of fresh air in the open and some conversation we were waved to the upper floor of Aspinwall on the right hand side. Artist Clifford Charles has depicted the alienation in the modern world, and gone to town with the second work below: 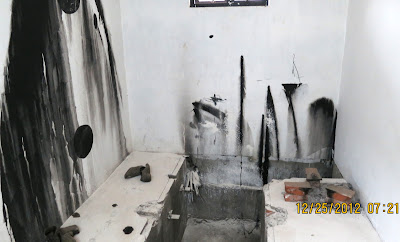 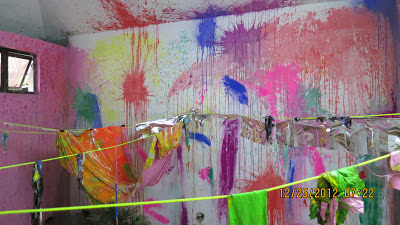 If this below were in greyscale it could have been the surface waves in a Japanese sand garden, for meditation. But its sheer brilliance of colour transformed it instead into a Holi scene: 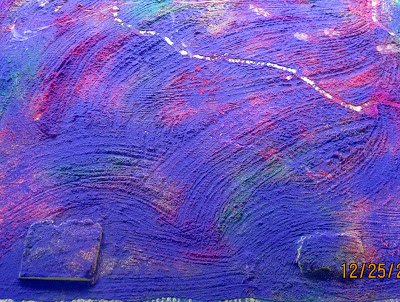 In the next room these swirls of colour, blue, green and beige, are the work of the artist, Zhang Enli. We need not seek their signification, because there is none intended:

In the next several small rooms artist TN Upendranath uses his body and skin in several levels of undress, to represent what he claims are a 'reflection of psychological & sociological interpretations,' whatever that means. It is best to view the works and ponder awhile, and pass on. Reading words on the subject will often spoil the experience, especially if they were written by a publicity hack. 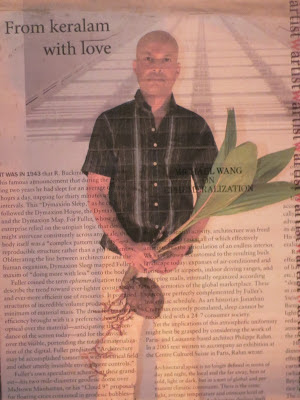 The next work is an exquisite etching on rock by Siji Krishnan. His fertile imagination exposes a woman trapped in a dragonfly's body. In the second close-up you can see genial animals caressing her body: 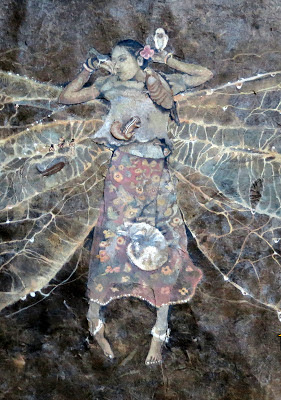 Photographer Anup Thomas seems to have a fascination for men in uniform. The primates of various Christian churches in Kerala are standing in full regalia beside their palaces:

Further along, a string of jagged copper plates align themselves to form a median strip. This artist is in search of patterns  and has found one by stringing together perfectly unremarkable artefacts - art by aggregation it might be called: There is a wonderful black and white short film on the washing away of an island in the delta in Bangladesh. What’s remarkable is the quick artistic hand of a potter drawing on wet clay the topography of the island and the structures on it. The rising tide flows in to obliterate the clay map itself that he has sketched with such wondrous facility. A lesson for global warming perhaps: 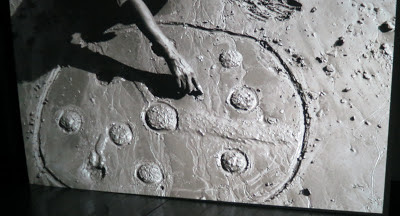 'Hallo, how are you,' says the legend on this exotic abstraction:

We learn from a map near the exit about the Roman trade routes to India in the 1st century AD -- Barygaza (Bharuch in Gujarat) and Muziris (near Pattanam), in Kerala:

The on-going Muziris archaeological excavations are shown in this photo collage:

One cannot leave an art exhibition without buying a few books. The DC Books store  has a few inspiring signs — We read to know we are not alone (C.S. Lewis) and There is no friend as loyal as a book (Ernest Hemingway):

The Indian anchor trick at Pepper House by Anup Mathew is worth seeing if you care to walk half a kilometre down Calvetty road:

For sheer craftsmanship, Sudarshan Shetty’s intricate trellis (jhali) in wood scores high. It is, perhaps, the only object I coveted upon exiting the galleries: 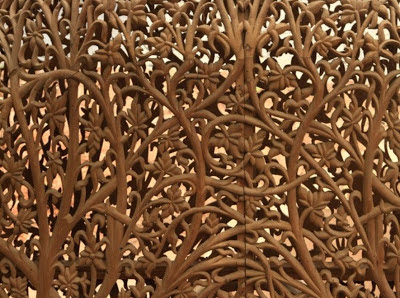 His 'swan sculpture' too will stand out anywhere: 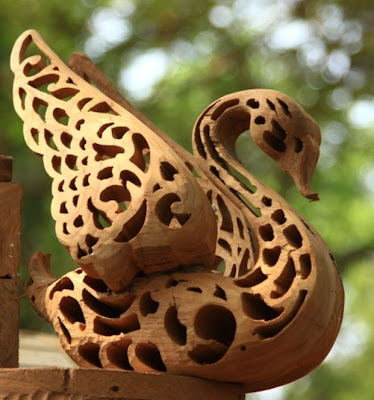 Hossein Valamanesh, born in Iran and settled in Australia, has set up a meditation room with cylindrical pillars of light surrounded by (Indian) carpets: 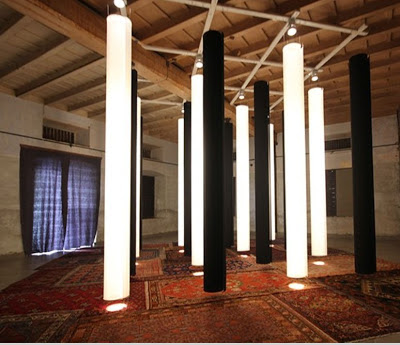 The only half-serious attempt at sculpture of the human body was by KP Krishnakumar: 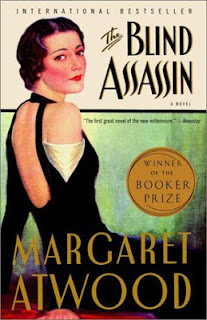 The reading took unusually long because the digressions of the novel were partially reflected by the discussions among the readers. The novel is full of juicy gossip and the women were quicker to seize upon the undercurrents and unstated liaisons. 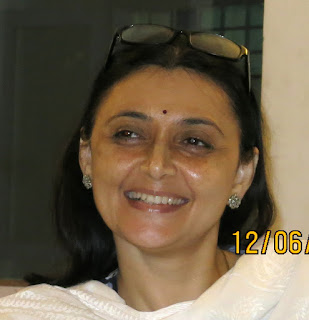 There’s a naïve socialist-Christian sister, Laura, in whose name the novel was penned by her older sister, Iris. The fact that there are two stories, one of the weird Sci-Fi type, and another of the realistic sociological type set in Toronto in the early twentieth century, did not bother the readers. Everybody agreed the first was a perfectly ignorable distraction. 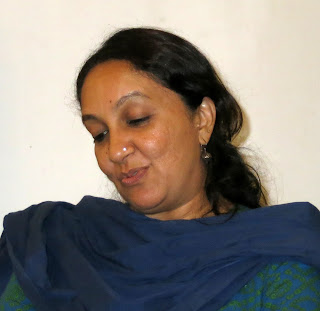 
It is in the nature of sociological dramas (it would make a good Malayalam TV serial, Sunil said) that the Canadian details are reflected in a society as distant as that of Kerala. Molestation of minors, marriages of convenience shorn of love, maid-servants aware of the shenanigans of the masters, competition among sisters-in-law, dangerous liaisons, and so forth are a part of the fabric of society everywhere; and the same kind of glossing over of facts to present a sanitised front must also be common.
Priya, Thommo, Talitha, Zakia, Gopa, & Sunil
A wonderful gift KRG readers have is to extract every snippet of humour from the conversations of the characters; the novel had enough to keep us mildly amused throughout. But none could explain why the novel deserved to win the Man Booker prize in 2000.

Here are the readers at the end. Zakia is missing as she had to leave early.

An exercise for the diligent reader appears just before the Readings.