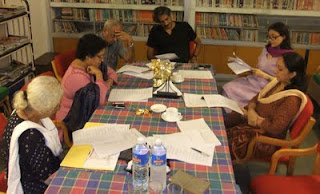 Priya reads from Shelley's Ode to the West Wind

KRG readers were wide-ranging in their choice of poets to recite: five nationalities, and two poets in translation. 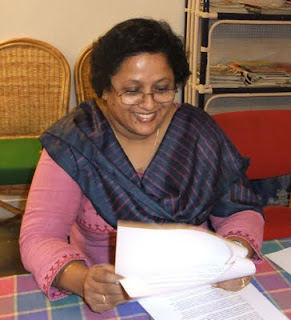 Many characteristics of poetry have been used to describe it. Here's one that Joe offered at this reading in connection with the French poet, Gérard de Nerval:

The end of a poem is creating a sound that resonates in the mind, long after its slight meaning is forgotten.

This will remind some readers of Dylan Thomas' reaction to a person who asked what his famous villanelle on death 'meant' – to which he replied, “You should listen to the sound of the meaning.” In the full account below you will come across further reflections. 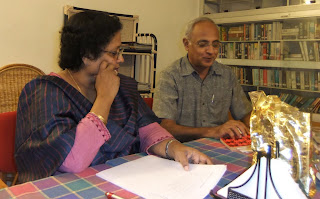 Judging from the laughter that resounded in the CYC library, we all had a good time; a verbal record will not capture the fun that attended the actual reading, though the readers had put in serious preparation. Talitha had insights and diversions to offer at every turn, and so did others.

While offering our commiseration to those who could not attend the reading, perhaps they will derive something of its flavour by reading the full account below. 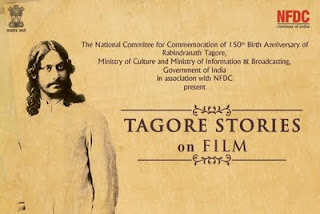 In this post Padmanabha sets forth his personal appreciation of the style and content of Rabindranath's short stories.

N.K. Sidhanta recalls that when Rabindranath started writing, the short story form had not taken root in India yet.
“But there was something in the form, in its conciseness and compression, that appealed to Rabindrnath. He explained in a letter to a friend that he was repelled by the elaborate convolutions in a long novel, by the laborious analysis of static situations and of events that had little significance. Through its brevity the short story subjected the writer to a discipline, and for a period Rabindranath welcomed this discipline for his objective writing.” (Rabindranath Tagore, A Centenary Volume, Sahitya Akademi, 1961)

Syed Mujtaba Ali, the Bengali poet and writer who studied at Santiniketan with Rabindranath, has used superlatives to describe his reaction to Tagore's short stories. Padmanabha starts off with Ali's comment and covers a slew of stories to see whether the praise was indeed justified. At a minimum, this will impel readers to drink at the source, if not in Bengali, then in English translations, of which several have been released.

† The six DVDs of the set can be purchased for Rs 339 from:
http://www.flipkart.com/movies/itmczcsmgdzyzpze 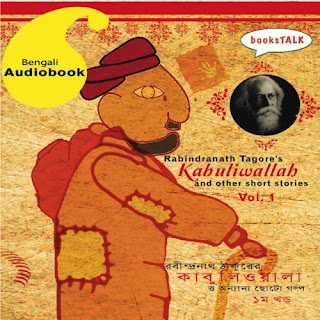 Like other great writers, R abindranath was attracted to the challenge of the short story, and some of his creations have been compared to lyric poems. They meant a lot to the the author also, as we learn from a letter of his from Shelidah, a village he lived in when looking after the family property:
If I do nothing else but write short stories I shall be happy, and I hope to make a few readers happy too. The main cause of the happiness is that the people about whom I write become my companions: they are with me when I am confined to my room in the rains, and on a sunny day they move about with me on the bright banks of the Padma. Today, since early morning a petulant little girl named Giribala has entered my imaginary world.

(This excerpt is quoted by Nirmal Kumar Sidhanta in his appreciation for the Tagore Centenary volume published by the Sahitya Akademi in 1961).

KumKum, Padmanabha, and Soma come to the end of their reading of Tagore short stories with a third tranche consisting of the following stories selected by Padmanabha: Sampatti Samarpan, Kabuliwala, Atithi, Prayaschitta, Anadhikar Prabesh.