The whole of India feels sad learning of the death of Dr. APJ Abdul Kalam, former President of India.

Everyone acknowledges that he was not only a distinguished scientist, but a President who changed the protocol of being President and made ease of access and doffing the vice-regal pomp of the office an essential feature of his tenure. He spent his life with the same frugality into which he was born in Rameswaram in a fishing village. He was the complete Indian who lived and breathed and understood and studied all the streams of life in India.

If there is a small homage we desire to pay we can read some of the speeches he gave on a variety of occasions. You can see them all at
http://www.abdulkalam.nic.in/

I choose these four below as representative. I was first led to admire him by reading this talk many years ago in 2007:
http://www.abdulkalam.nic.in/abdulkalam/sllatest1.jsp?id=961

He is addressing students of a Sanskrit school and starts off by reciting a mantra, which he translates into English in the next few lines for the अनपढ (ignorant) like me. Then he remembers his Sanskrit teachers. And launches into something he has taken time to prepare and none could write but him. He shames Presidents who have to depend on what a speechwriter feeds them. In his case the wealth of personal experience and learning gave him unparalleled access to the knowledge out of which he could speak.

He was ever a child, never grew out of the enthusiasms of a child, or the curiosity, or the energy of a child. Everyone spoke of his simplicity. He narrates an incident in the following address he gave to students of a school in Bhuj (Gujarat) about an occasion when his father thrashed him. It's quite instructive, as it certainly was for him:
http://www.abdulkalam.nic.in/abdulkalam/sllatest1.jsp?id=971

A young student from a School in Bhuj, Kutch District, Gujarat who attended

In the next event, a convocation Address he gave at the Women's Christian College, Chennai, Dr Kalam recalls the words of the Founder-Principal, Dr Miss Eleanor McDougall, who said, "We can do no better service to India, than to liberate the energies of wisdom and devotion which are latent in a woman." He goes on to tell the story of a conversation he had about the GDP index with John Nash, the Nobel-winning economist; and talks about his predecessors at the Indian Space Research Organisation (ISRO) and how Dr Vikram Sarabhai met the Bishop of Trivandrum to get land for what is now called the Vikram Sarabhai Space Research Centre, which began life as the Thumba Equatorial Rocket Launching Station (TERLS) in 1962:
http://www.abdulkalam.nic.in/abdulkalam/sllatest1.jsp?id=979

Here is the last one I offer where Dr Kalam ponders on the advice of Lord Buddha to the Sangha and how it felt to be sitting under the same Bodhi tree 2,500 years later:
http://www.abdulkalam.nic.in/abdulkalam/sllatest1.jsp?id=1021

Dr Kalam at the 2550th Anniversary of Mahaparinirvana of Lord Buddha

Monks at the 2550th Anniversary of Mahaparinirvana of Lord Buddha, Kushinagar, Uttar Pradesh

It is when you read these talks you come to an understanding of what it really means to live as an Indian. It is not tolerance of differences, it is love of the other. This man embodied it and he was not lazy to apply his mind to whatever came his way that required understanding. 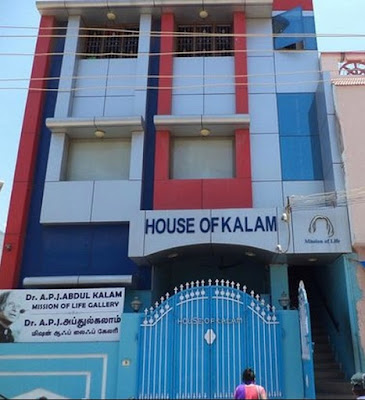 KumKum and I visited his house in Rameswaram, when we were on a temple tour of S India before going to the ex-IBMers gathering in Kodaikanal in Feb 2014. The house is a kind of museum, with a street-front only about 20 feet wide and you go up a narrow staircase to the first floor and see rooms set out with Dr Kalam's awards, books, plaques and honorary degrees. This house belonged to him and his elder brother and stands on a narrow street. The house is as unpretentious as the man himself was. Some of the garish borders are later add-ons; the original house was a light blue wash.

As it turns out the only occasion when KumKum and I met him was quite similar to the event where he took ill and died in Shillong addressing students at one of the newer Indian Institutes of Management. On Feb 4, 2008 KumKum wanted to hear Abdul Kalam, for he was listed in the Kochi newspaper as speaking at the School of Social Sciences at the 100-acre campus of the Rajagiri School of Management in Kakkanad: http://rajagiri.edu/ 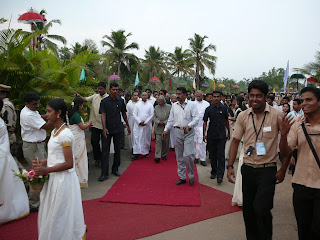 The former President was speaking on 'Creative Leadership.’ Obviously, he cared for his audience and prepared. On the same day he was speaking at three other places! Professionally, he was Mission Director for some of the early Indian satellite launches. He combined enthusiasms in several fields that made him lively and interesting. He was a devout Muslim, but was as familiar with the writings of the Hindu saints of S India as he was with the Koran. Indeed he quoted one of them, Saint Thiruvallavar in Tamil during his leadership talk on that day: “For those who do ill to you, the best punishment is to return good to them."

So there he was, a vegetarian Muslim, quoting a Hindu saint in Tamil to students in a Catholic institution, with English as the necessary lingua franca to get his message across – although by upbringing he was a fluent speaker in at least three S Indian languages and could have got his message across in shudh Malayalam with the same ease, perhaps.  He emphasised the need for integrity everywhere he went, and sometimes, with graduating students, he would make them recite an oath after him to act with integrity, in whatever they did thereafter with their lives.
Posted by KRG Convenor at 13:30